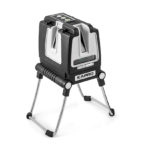 Kapro Tools recently introduced its 873G Prolaser® Vector Green Laser Level. The 873G is comprised of a green beam with a wavelength that is more easily detected by the human eye to see than a red beam. This allows the beam to be seen over a greater distance, up to 200′ using a detector. It also features an outstanding accuracy of 0.0002″/1″, which is less than 1/4″ at 100′. The 873G Prolaser Vector Green Laser Level is packed with a number of innovative features, including: