The 2017 hurricane season is one many will never forget. With two deadly hurricanes, Harvey and Irma, making landfall in the U.S. within weeks of each other, our southern states, in particular, experienced a great deal of devastation. In the months to come, millions of residents will work to repair the damage done to their homes or those around them – many, having lost their homes and belongings, will have to start over completely.

Numerous NWFA members are among those affected by the hurricane aftermath, both personally and professionally. 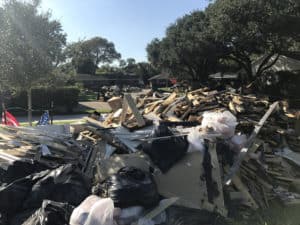 “I had about 2-1/2 feet of standing water in my house after Hurricane Harvey hit,” says Rob Navon of Houston Floor Inspections in Houston, Texas. “I live near a bayou, so the water came in quickly and didn’t allow for time to move things. I lost all of my furniture and all three of my cars.”

Another member, Neil Moss, had three family members including his brother-in-law, industry veteran Mel Hollis, who saw more than five-feet-high sewage and water in their homes.

“In the U.S. Army Corps of Engineers’ efforts to keep dams from failing, many neighborhoods and businesses downstream that had never flooded, nor were flooded during the storm, were intentionally flooded. My family members’ homes were among those,” says Moss.

“We sold out to investors and are currently living with my daughter and son-in-law,” says Hollis.

One thing both Navon and Moss saw immediately following the storm was hospitality. “Our community received tremendous assistance from local groups as well as out-of-town and out-of-state friends who came in to help remove rubbish or tear down drywall,” says Moss. “Other volunteers showed up with food to feed those who had just lost everything. It was quite a sight to behold.”

Navon had a similar experience. “I was rescued from my home via boat and brought to a community shelter where there was food and a place to stay. It was incredible to see everyone come together and help in this time of dire need.”

The next step for many of the affected residents will be figuring out what to do with all of the damage. With millions affected, it could take months to receive money from insurance companies, which could prevent many from being able to begin repairs to their homes or move elsewhere.

“One of the first things I did was go to a dealership to find a new vehicle,” says Navon. “It was a huge challenge finding a vehicle that didn’t have water damage and was reasonably priced. Many dealers were trying to sell cars that were damaged. Some people might not have picked up on the damage, but as an inspector, it didn’t take more than a look underneath the car for me to recognize water damage.”

After he found a vehicle, Navon started seeking remediation companies and general contractors to help get his home back together. “The remediation company I hired came in and took up about 2,000 sq. ft. of hardwood flooring in my home,” says Navon. “They also placed blowers and dehumidifiers throughout to bring the moisture content back to an acceptable level. Months later, the moisture content and relative humidity still do not meet recommendations for installation.”

Another challenge Navon faces has been finding a reliable general contractor with a reasonable quote. “One guy came in and said it would cost $175,000 to replace and repair the damage done. Another was asking for $2,500 just to come out and give an estimate. A third was already booked until February 2018 and not taking any new clients,” adds Navon. “I’ve seen and heard of so many out-of-state guys coming in to get extra work but don’t really have the qualifications to do so, and on top of that, they are price gouging because of the obvious demand. In one situation, an out-of-state contractor came in trying to sand and finish cupped floors when they clearly needed to be torn out.”

Unfortunately, that seems to be a common occurrence – Moss, Hollis, and Lenny Hall, owner and operator of Endurance Floor Co. in West Park, Florida, are seeing a similar trend. “There’s a huge shortage in drywall and drywall hangers, and guys are coming in and ripping that stuff out and getting ready to put new floors over a wet subfloor and within walls that haven’t been allowed enough time to dry or be treated,” says Moss.

“A huge difficulty we’re seeing in our area is that the already short labor pool is now evaporated,” adds Hall. “Any warm body willing to work has been hired by companies that can work with low skill level personnel.”

“In homes that saw a few feet of water, mold is already starting to show through the ceiling,” adds Moss. “It will take months, and in some cases, more than a year, to treat the homes and get them to a place where they’ll be ready for new materials to come in.”

“The Houston Remodeling Association is predicting six to seven years to rebuild due to the shortage of skilled workers,” adds Hollis. 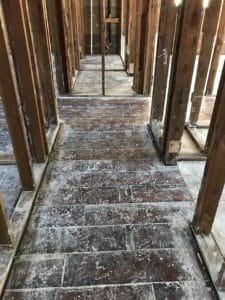 In all of this havoc, Moss has noticed a positive trend with the hardwood floors in many homes. “Of the 21 floors I’ve been trying to save, all of the engineered hardwood, rotary or sawn, were saved, at least structurally, and not a single floated floor could be saved. Unfortunately, many sat under sewage water for more than a week so they won’t be salvageable due to becoming a potential health hazard, but it’s still cool to see that a properly installed hardwood floor could withstand so much devastation.”

In the midst of recovery efforts starting from Hurricane Harvey damage a few states over, Hall was doing what he could to get ready before Hurricane Irma came through. “Before the hurricane, I ordered additional stock in most-used items: plywood, nails, sandpaper, and finish,” says Hall. “We shut down operations that Wednesday after fueling all of our trucks, allowing our guys to get their homes and families ready. The Tuesday after the storm hit, I visited two building suppliers and bought all the circular saw blades on the shelf. It took more than a week to find electric cords, cables, plug ends, and plywood.”

“Operationally, the difficulty comes with the in-progress work, the work in the pipeline, and then dealing with the amount of work heading our way. We have a policy in place where we only take previous clients during times of high demand, such as this,” adds Hall. “We’ve worked that way since Hurricane Andrew hit in 1992 and our clients are very appreciative, exceptionally loyal, and our greatest source of goodwill.”

“Most jobs are a total replacement,” says Hall. “We expect to be working on Irma related work for the next four to six months.”

Amid so much devastation and heartbreak, it is important to find someone you trust to help make repairs to your home when your home is ready. The NWFA is happy to help offer recommendations for issues our members and consumers may be facing.