Joe Buckhaults of Robinson Lumber Company and I have been considering how to best use Transparency International’s (TI) research into corruption around the world.  We’ve been comparing how the US and Brazil fared in their two main reports, but I thought I’d pull out a few additional highlights from the site.

First, the site also looks into the concept of “exporting corruption.”  The US ranks very well here as we have a great volume of regulation that is well enforced against US corporations bribing officials or businesses overseas.  The site doesn’t always say that citizens of other countries ARE acting corruptly overseas, but it does give many countries poor rankings in terms of even having policies governing behavior overseas.  TI calls into question many European countries specifically as being strong at home but week abroad: 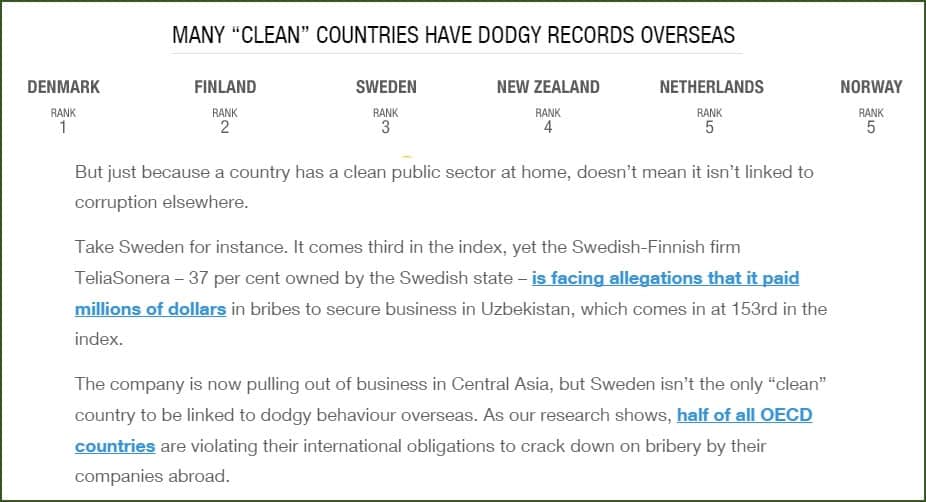 The site also has a very interesting survey of individual’s belief in their own behavior or the responsibilities of their corporations.  I pulled out the US and Brazil, since they’ve already been studied in the earlier blogs, and threw in China’s results as well, since that’s a country frequently commented upon within the flooring industry.  Here are four of the survey questions and the results for both the world and the three specific countries.

First, how do individuals feel about their own personal responsibility?  For the most part, everyone feels responsible, which is great.  Theoretically (imagining getting involved in the fight), the US and China have identical results, both of which are lower than the international average…on the other hand, Brazilians feel a greater sense of responsibility than either country or the international average.  However in terms of taking action, Americans seem much more confident that they really would report an incident. 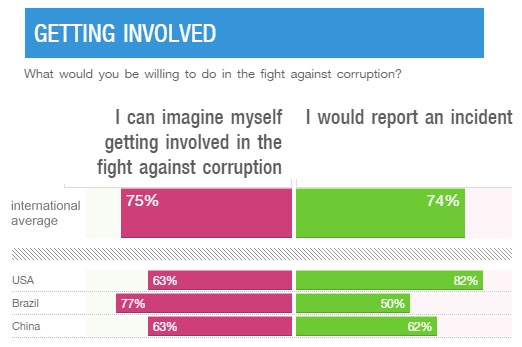 A second question focused on how do the people look at their corporations’ responsibilities.  Again, most people think they have an obligation to do so, with Brazilians once again coming out on top and the US and China virtually tied—and again, both under the international average. 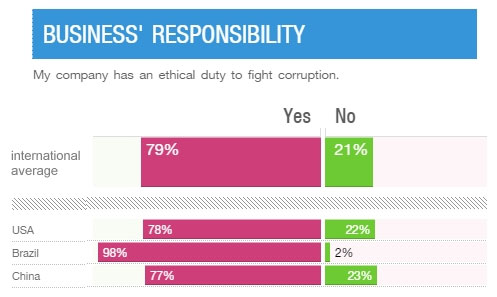 The above is more theoretical—now when you consider the reality, the question is if your company actually has measures in place to fight corruption, well, the US is pretty low in terms of actually have stated policies and plans.  Both Brazil and China come in under the international average as well. 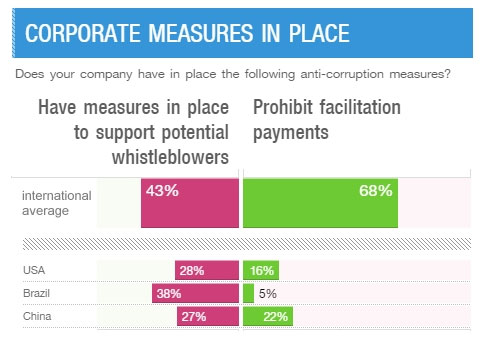 Finally, what do you think outside the company is going to have an impact?  Interestingly, most of the world, as well as Brazil and China, all seem to think that the media is going to figure out and stop corruption.  The US seems to think that reform needs to come from within—there’s not a lot of faith in laws or journalists to figure out what’s going on… 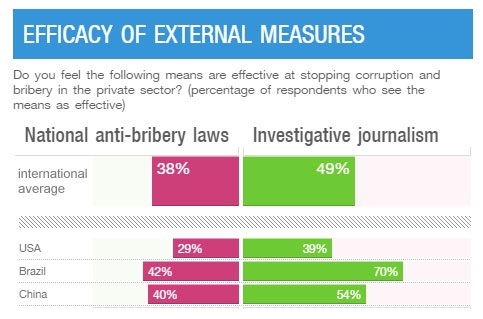 There’s a lot more on the site to consider and playing around with statistics is always fun.  But I think the big take away here is that just a single statistic can be highly misleading.  You need to dig deeper into all the angles to try to get a more meaningful picture.  And we haven’t even begun to consider survey bias (such as who did they ask for these questions—their level of education or experience in business or…?) or culture issues (do Americans not have official policies in place because it’s presumed that you won’t bribe someone?) or the impact of timing (would people give different answers about the government during an election year or about the police just after a shooting?) or any of a number of other factors.  Stats need to be considered in context and for the most part, we get these out of context.

Next week we’re going to have more fun with numbers.  Did you know there is a statistical link between cabbage and “innie” belly buttons or egg rolls and dogs?  Fun stuff ahead! 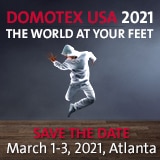