This post is a natural follow up to the review of corruption statistics over the last few weeks, but actually it’s been on my list to explore since I watched John Oliver take on Scientific Studies (full clip here—and I consider it required viewing please!).

Here are some the main take-aways to consider:

Let’s go into some examples.  Last week, I promised you a consideration of cabbage and belly buttons, right?  That is an example of “p-hacking,” which is part of number 5 on the list above  This is a serious issue, as this blog at the National Institute of Mental Health outlines, or as discussed in these blogs on the Public Library of Science website, one of which go so far as to say that most scientific studies are false.   So just what is p-hacking?

Basically it is manipulating statistics.  There are many different ways to do it, but the result is that nonsignificant results become statistically significant or results are deliberately created or developed in a way to give them false significance.

The 538 site has several excellent posts on p-hacking.  In this one, they posted a chart showing the results of a survey they did that found, among other things, a statistically significant relationship in their survey between to eating egg rolls and owning a dog and the use of salt with feeling good about your internet provider.  Here’s the full chart: 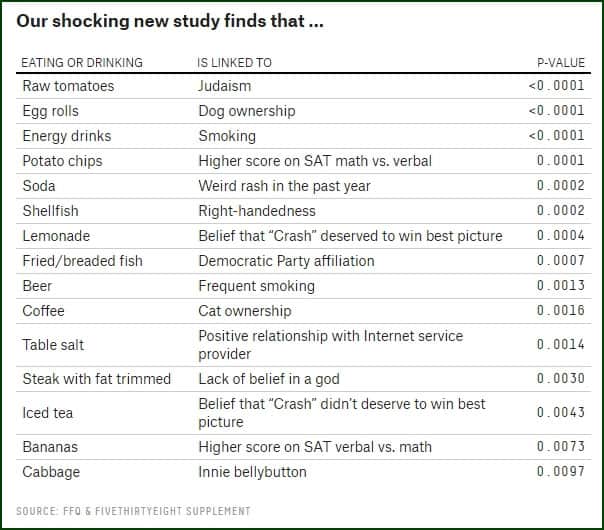 That particular post was focused on the challenges of doing meaningful dietary studies and if you’d like to be both grossed out and give up on taking food science seriously ever again, do go to the end of the post and watch their small video on the impossibility to compare, well, apples to apples….

I’ve done many previous posts arguing that we can’t put everything into sound bites.  We have to dig into the details.  Here’s another example from the site:

…a 2013 study found that people who ate three servings of nuts per week had a nearly 40 percent reduction in mortality risk. If nibbling nuts really cut the risk of dying by 40 percent, it would be revolutionary, but the figure is almost certainly an overstatement, Ioannidis told me. It’s also meaningless without context. Can a 90-year-old get the same benefits as a 60-year-old? How many days or years must you spend eating nuts for the benefits to kick in, and how long does the effect last? These are the questions that people really want answers to. But as our experiment demonstrated, it’s easy to use nutrition surveys to link foods to outcomes, yet it’s difficult to know what these connections mean.

Isn’t that the bottom line?  We have to understand how the statistics are related to each other and to our own lives…not everything is meaningful.  It’s like the corruption stats from the earlier posts—we need to look at relationships and context to come up with meaningful applications.

The same site posted a very fine article called “Science Isn’t Broken:  It’s just a hell of a lot harder than we give it credit for” which concludes most appropriately:

The scientific method is the most rigorous path to knowledge, but it’s also messy and tough. Science deserves respect exactly because it is difficult — not because it gets everything correct on the first try. The uncertainty inherent in science doesn’t mean that we can’t use it to make important policies or decisions. It just means that we should remain cautious and adopt a mindset that’s open to changing course if new data arises. We should make the best decisions we can with the current evidence and take care not to lose sight of its strength and degree of certainty. It’s no accident that every good paper includes the phrase “more study is needed” — there is always more to learn.