In today’s wood flooring market, wide plank is king. It seems like it wasn’t long ago that we called 5” wide-plank, but today, most consumers shopping for “wide plank” wood flooring are thinking of 8”, 10”, or even wider. 7” is the new 3”.

Old habits are hard to break. As the trend toward wider planks progresses, some installers in traditional nail-down markets have been slow to adapt to the special requirements that come with wider floors. For years, the NWFA has recommended adding glue to the equation when installing anything wider than 5”, but many installers figured that wasn’t necessary when working with today’s engineered products. Some painful lessons had to be learned. The truth is, wide planks move.

Even with a highly stable engineered product, there is no getting around the fact that the number of fasteners you can put down per square foot drops as the planks get wider. Double the width of the flooring from 4” to 8”, and you’re putting down half as many fasteners per square foot. With so few fasteners, even a tiny amount of movement or cupping can loosen up the system and create noise. The steel needs help.

CAREFULLY, OR NOT AT ALL

The idea that a little glue is better than none at all can be dangerous. Installers accustomed to nail-down work sometimes bristle at the idea of gluing a floor down. It’s messy and slow, and the glue is expensive. So, when the plank width demands assistance from glue, the natural inclination is to use as little as possible – just throw down a few beads as added security and let the nails do most of the work. This may be a mistake and actually can create more problems than it solves. Once you leap into using glue, it has to be done right.

A critically important part of a successful glue-assist installation is making sure the planks are pressed down into the glue before driving fasteners. The best approach, as recommended in the NWFA guidelines, is to stand on the plank you’re nailing down. This is critically important when you’re using a trigger-activated nailer that’s not applying downward pressure itself. If you allow those planks to rest on top of those beads of glue and don’t flatten them out before you sink a nail, you’re building a floor with a thousand little bridges – bridges that bend.

Another one of the more common causes of problems in glue-assisted installations is failing to properly space the beads of adhesive. If the beads are too far apart, you are not getting enough holding power, and you are potentially creating spaces between the subfloor and flooring that are large enough to allow vertical deflection between them, resulting in hollow spots and movement that can lead to fastener squeaks. The thinner and more flexible the flooring, the greater the risk, but we’ve seen issues even on ¾” thick engineered flooring with Baltic birch backing, where 12-16” wide spaces between the beads was causing the floor to bounce and squeak. The installer might have been better off with no glue at all.

The NWFA’s new guidelines on Glue-Assisted Nail Down installations show a few different glue bead patterns that can effectively ensure a successful installation.

However, be careful not to just follow the diagrams, because the text that follows them in the guidelines is critically important. It lays out the minimum bead size and bead frequencies for each pattern, recognizing that the glue has to be applied out to the edges of the planks and in dense enough patterns to ensure against big voids. For example, if you are doing the ‘parallel stripes’ pattern, the beads need to be spaced 6-8” apart, like your fasteners, and they need to extend out to both edges. Following these guidelines carefully is key.

Among the methods laid out by the NWFA guidelines, we’ve seen the best results with the serpentine pattern. NWFA currently recommends spacing the peaks of the S-curves in that pattern at twice the plank width. (Based on our experience, we would rather see installers keep the spacing to around 10”, regardless of the plank width. Where the peak-to-peak spacing is greater than this, we have found that there could be more of a risk for failure, especially for really wide boards of say 8” or 10”).

The ‘ends & grooves’ pattern, where a bead of adhesive is applied along the groove edge and both ends, in effect, acts like a second row of fasteners along the groove edge. We have found this works well for planks in the 5-7” range, but for wider flooring, it leaves a lot of space between that bead of glue on the groove side and the fasteners on the tongue side. Again, density of hold-down locations is key, whether they are fasteners or beads of glue. For wider boards, you might consider another pattern.

Once you’ve chosen your pattern, a little coaching for your crew, and frequent check-ins to make sure they’re careful to stick to the pattern are critical. We saw a job where the installer started off with a nice, tight serpentine pattern, but as the job progressed, the peak-to-peak distance of his curves increased, and the peaks got farther and farther away from the edges of the planks. Less glue was being applied, the distance between beads was increasing, and the groove edges were being neglected. Sure enough, the rooms installed over the first part of the job were fine, but the ones installed toward the end were popping like popcorn. It’s important to remind your crew that the glue isn’t just there to supplement the nails. It’s part of a system, and if you don’t do it right, you’re worse off than with no glue at all.

Some installers worry about doing a full-spread install on a wood subfloor because if something goes wrong, it’s virtually impossible to pull the floor up without damaging the subfloor. that’s true, but a properly executed glue-assist installation requires enough glue that it too will be tough to pull up. If you’re using glue, you’re committed, one way or the other.

While a glue- assisted installation can work great, be careful not to oversell its benefits to your customers. It is not a guarantee against squeaks. Flooring adhesives are elastomeric, so those wide planks can still move a little. The more glue you use, the less risk of noise you will have, but even with a full-spread layer of glue, once you add fasteners to the mix, you’re adding the potential for noise. If you have a really wide floor or a really particular customer, consider leaving your nail gun in your truck and breaking out the trowels.

Danny Harrington is the VP of Marketing & Product Development at Galleher LLC and oversees Installation guidelines for the Monarch Plank, Reward Hardwood, and Royal Custom Plank & Parquet brands. He can be reached at dharrington@galleher.com. 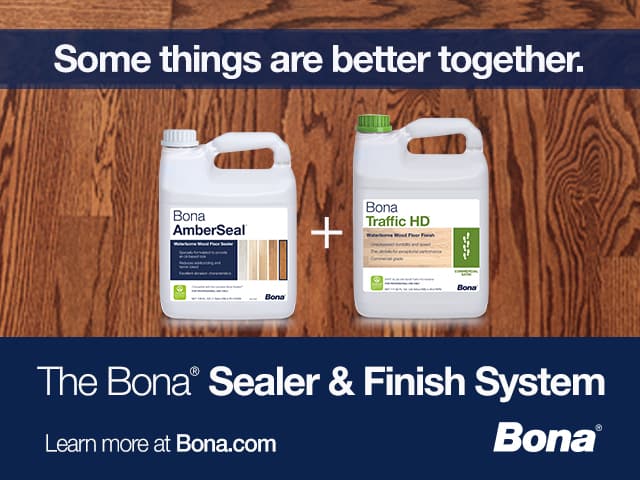