I got a call for a kitchen and dining room refinish, which didn’t at all sound like a unique or large job. I figured it was probably an old house with about 500 square feet (46.451 square meters) of oak floors, but that couldn’t have been further from the truth.

As I was listening to my phone direct me where to drive, I made it into one of the more established and luxurious neighborhoods in my area. The gate to the driveway opened, and I started driving up the hill towards the house, and I realized this was not a 500-square-feet refinish. It was a big, nicely built home I walked inside the home to find about 2,000 square feet of wood floors in need of a refinish. The floors were yellowish and cupped. After a short chat, I walked around measuring and taking notes, while the homeowner was checking out my work pictures.

Holding my portfolio book open, he asked if I installed the medallion in one of the pictures. I said yes and gave it no second thought. Then he asked if I thought a medallion would look good in his floor. Something about the way he asked, told me he was dead serious. I stopped measuring and stood with him at the entry, where I started talking about what size, shape, and style medallion would work in the house. More importantly, I talked about which colors, species of wood, and details would complement the home. We both agreed on something simple but stunning. Something that was not too busy, yet would make a statement.

Later that day, I sent him some pictures and links to wood medallion pictures. I immediately got the okay for the job with another surprise: he wanted me to choose the medallion for the floor. (He seemed a little overwhelmed with all the options, and I was more than happy to do so.) We scheduled a phone meeting so that we both could be in front of a computer to look at the options. Out of the many options I presented to him, we agreed on a very nice medallion design produced by Oshkosh Designs with the following changes:

It’s been a long time since I ordered a medallion (I usually make my own), so I was a little anxious about the timing. For me, the time invested in making a medallion can be a matter of hours to days, but due to the timing of the job, I felt ordering one was the best option. I paid extra to expedite the shipping to allow the medallion to acclimate in place before we finished it.

The refinish was a straight-forward job – sand down to bare wood and apply three coats of water base. Adding the medallion was the fun part. The owners and I met to discuss the exact location of the medallion before installation. This medallion was 5 feet in diameter (1.524 meters), which meant the template could not be made of one piece. It was made of four pieces, which gave just enough wiggle room for error. I routed out the cavity for the medallion and then had to shave off a hair here and there until I got a tight fit. Side note for reference: when you buy a medallion, the template has a notice that indicates “This side up”. Otherwise, you may have a very loose fit medallion. The template is cut at an angle, so pay attention.

Since I substituted wood species, I decided to seal the medallion with dewaxed shellac first. A thin coat of this great sealer guarantees the oil in the exotic woods is locked in. This layout was by far the hardest layout to coat with water-based finish. All three of us rolled the finish from one side of the house to the other. Using a T bar would have given us a problem coating this one.

Being able to sell our refinish process, upgrade a job to a medallion install, and finish on-time without problems is not taken for granted. I always look at my training, my friends, and my colleagues and everything I do to stay involved in this amazing trade. Remember that if you read or see something that looks really easy to do, it’s probably not. This job was no different, but with the right knowledge and experience, we were able to deliver on time and have a happy customer.

It’s one more reason to keep learning, go to school, and attend the NWFA Expo. 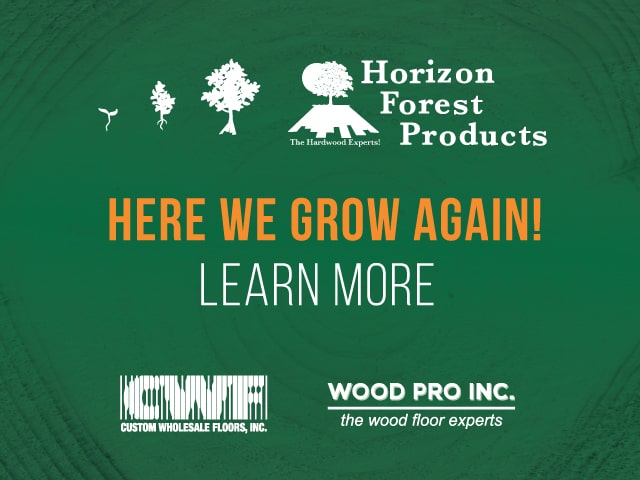