Relative Space is a third-generation family business that began in Toronto in the 1970s as H&I Carpets, named by its founder, Howard, after himself and his wife, Idie. Howard and Idie’s son, Brian Greenberg, met his future wife, Joan Kritz, working at H&I, and in the 1990s the company evolved into Floorworks under the management of the second generation. In 1999, Floorworks launched the Fuse and Sumo brands of engineered wood premium flooring, inspired by the demands of Canada’s variable climate.

Since 2001, the company has been called Relative Space and is now run by the grandchildren of its founders. The current generation has focused on sustainable flooring and grown the company, expanding the distribution network across the United States and Canada, and opening new flagship showrooms in Toronto’s King East Design District and New York’s SoHo neighborhood. Relative Space’s projects have a diverse client roster, with the company’s flooring now found in hotels, office towers, retail stores, and restaurants around the world, including Milky’s, a new coffee shop in Toronto.

The Milky’s installation featured a modular wood system known as the Matita collection. The collection is an engineered product that was created by manufacturer Foglie d’Oro and is composed of three wood species, two marbles, and three specialty materials, all placed on a diamond-shaped board that can be installed in a variety of patterns. This installation utilized white oak.

The product was installed on the floor, walls, and ceiling, and allowed the team the ability to create a strong graphic pattern that ties into Milky’s brand identity. The pattern wraps the entire space, and it was designed to align precisely with thin metal shelving that lines the perimeter.

“We had to take the pattern and develop a starting point. We chose 42”, which is the counter height as well,” says Fraser Greenberg, Co-Owner of Relative Space. “Then, because there was an inch-and-a-half difference in height from one side to the other side of the floor, we had to cut those long boards on site to be slightly different heights to adjust for that irregularity in the height of the floor.”

Once the walls were installed, the team then installed the ceiling, and finally the floors.

“When you’re dealing with older buildings, there are no 90-degree angles at all. Because it was a very geometric pattern, it was essential that every time we did a row, we had to have our laser level up to make sure that everything was lined up perfectly. We had to make all those minor adjustments that were required to get that perfect installation row by row by row,” says Greenberg.

The wood on the walls and ceilings was installed using glue and nails, and the CNC-milled prefinished wood flooring was installed with a glue-down method. The installation took 10 days to complete.

“It was a slow, meticulous process,” says Greenberg. “It’s important that things line up perfectly on projects like this, and we needed to compensate for the geometric inadequacies of an old building. It’s just part of the job of doing it right.” 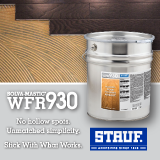