How many times have you encountered a situation where a homeowner decided to remove a wall and now there is an area where flooring is missing? You might decide that the best solution is to simply install the same species of wood where the wall was once located. But why not be a little more creative and make it look less like a repair and more like a planned feature strip? Join me as I take you step-by-step through this process featuring a recent installation my team did.

Step One: The Layout
We began by first laying out the border placement in the area that needed to be repaired. Then we determined the center point of the wall so that we could measure off the center line to the widest part. This way, we could then determine the total width of the border. We needed to take into consideration the fact that the border lengths come in 3-foot sections. Instead of starting from one side and being left with a small piece at the end, we had to determine the center point of the repair and then go from the left and right to make the border centered in the space. 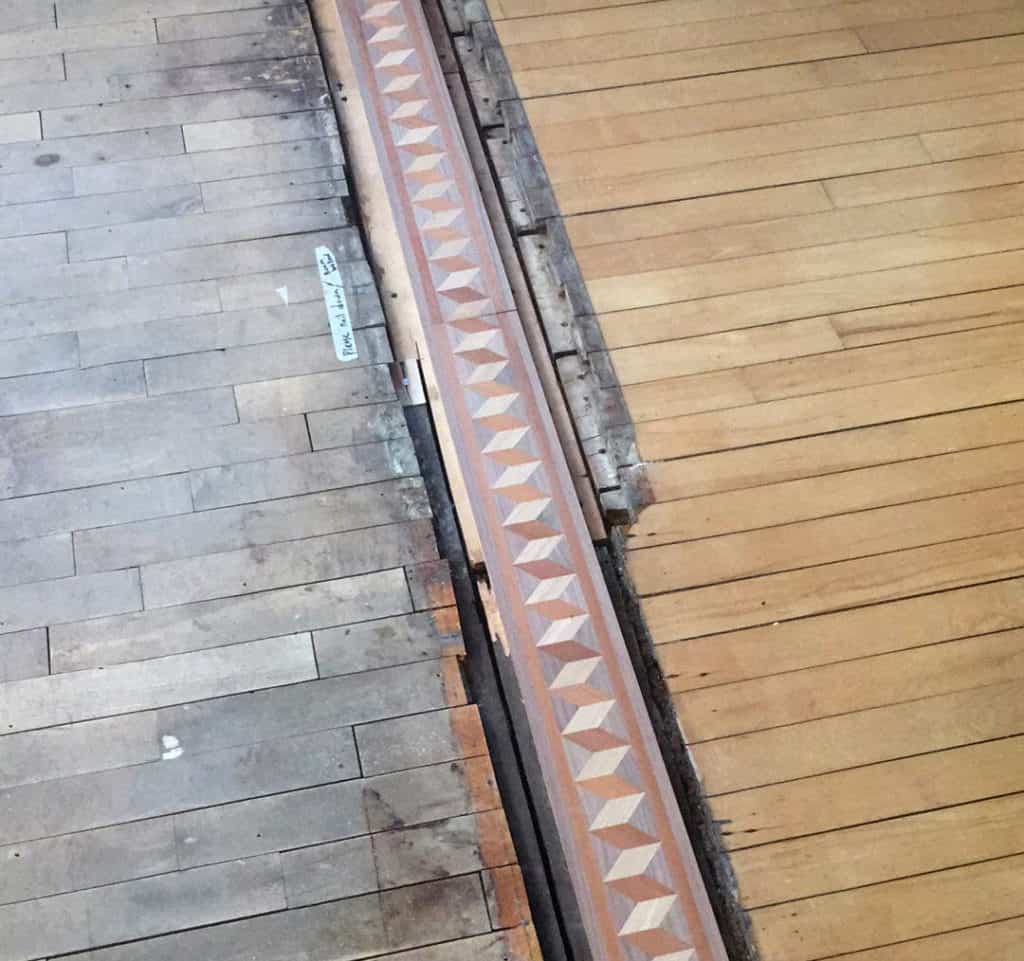 Step Two: The Cut
Next, we used a track saw to make sure that the cut was going to be a nice, straight, factory-cut. For the areas that the track saw was unable to get, we used a small oscillating tool to finish up the end cuts. 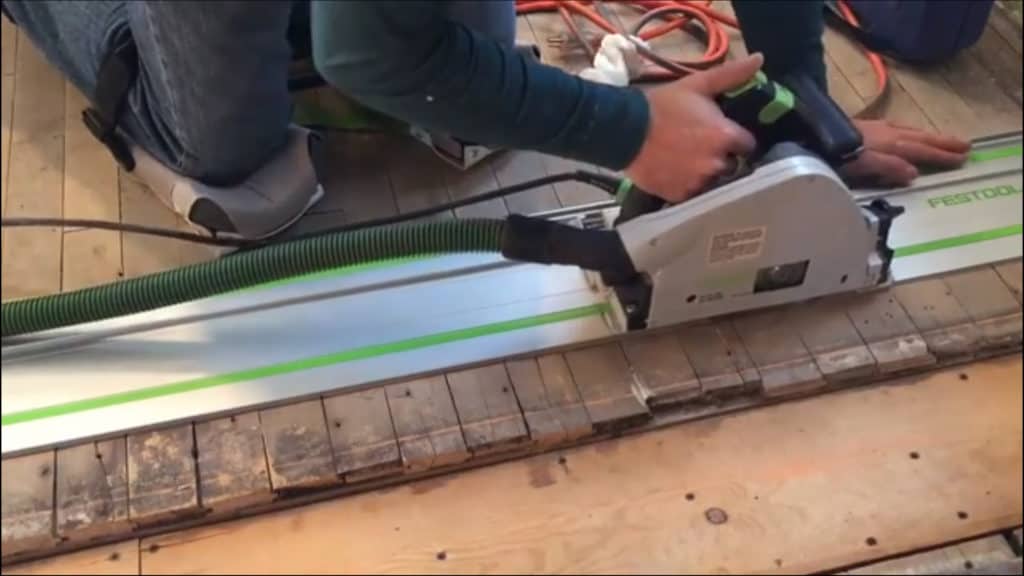 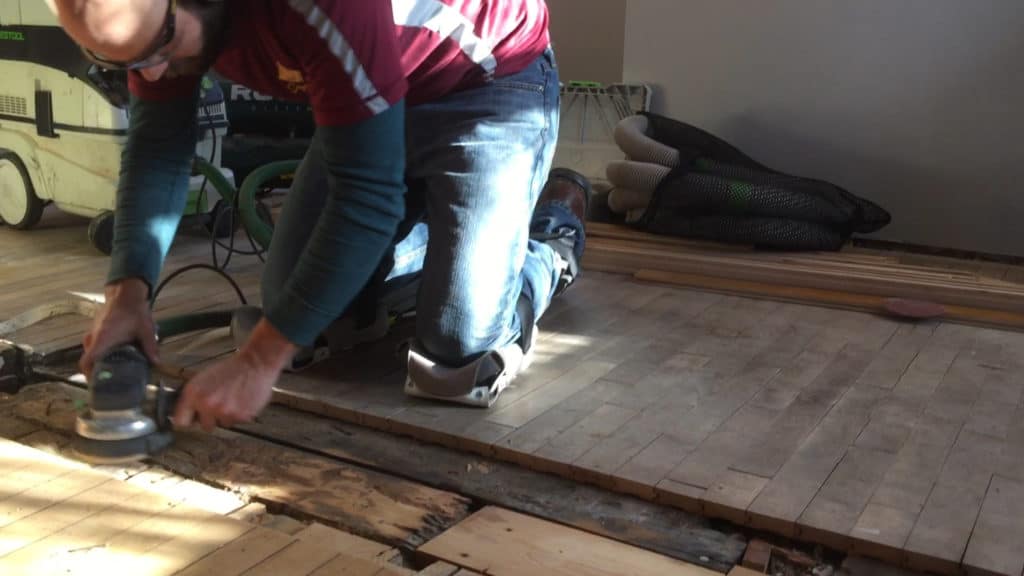 Step Four: The Joining
Generally, you want to use a router and create a groove that you can either put spline or slip tongue into in order to join the floors together. What I have noticed in working with older homes is that the floors typically are not flat. Often when trying to join the two floors together, making a tongue for the groove to slide into can create problems. This may lead to inconsistent routing, which takes away from the wear layer of the floor. So what I like to do when working in older homes where the subfloor isn’t flat is take a flooring adhesive specifically designed for wood flooring, or one that is polyurethane-based so that it stays flexible and not rigid. I then run a heavy bead of glue along the bottom of the existing floor. This way, once the flooring is installed next to the perpendicular flooring, it will bond the two floors together.

Step Five: The Installation
Next, we placed 2 1/4” maple boards into beads of glue. Using both glue and cleats ensured proper fastening to the subfloor. The border was installed in the same manner, with the only difference being the border piece was grooved on both sides. On the other side, we put wood glue in the groove and put spline in there and continued laying the maple floor in the same way. Then we continued with our last two pieces of maple flooring. The last board had to be slightly scribed. I placed the wood in the location it would be installed. With a pencil, I marked the areas on the board that were tight. Then I took a rotary sander and removed the excess wood down to the line and then tried fitting it in place and repeated the steps until a nice, tight fit was achieved. We used the wood floor adhesive to secure it to the subfloor along with small gauge nails. Generally, I don’t like to face nail, but because of the undulations in the subfloor, we used a smaller gauge nail to hold the wood in contact with the subfloor until the glue set up. 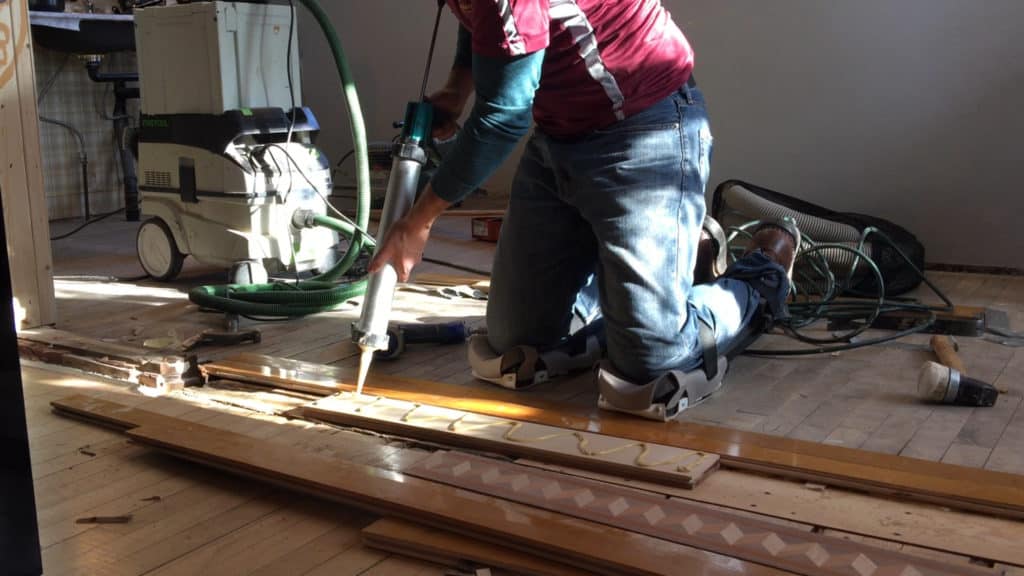 Step Six: The Sanding
After it was installed, it was time to begin the sanding process. We needed to take into consideration that the border had many different species of wood going various directions. The hardness of the wood also required a different way of sanding. When I sanded it with the big machine, I kept my hand on the feathering handle to keep the pressure consistent, so it didn’t dig out some of the softer species of wood. Then I hand-scraped the high spots down to the height of the existing floor. To conclude the sanding process, I used a rotex sander to remove any of the cross-grain scratches. 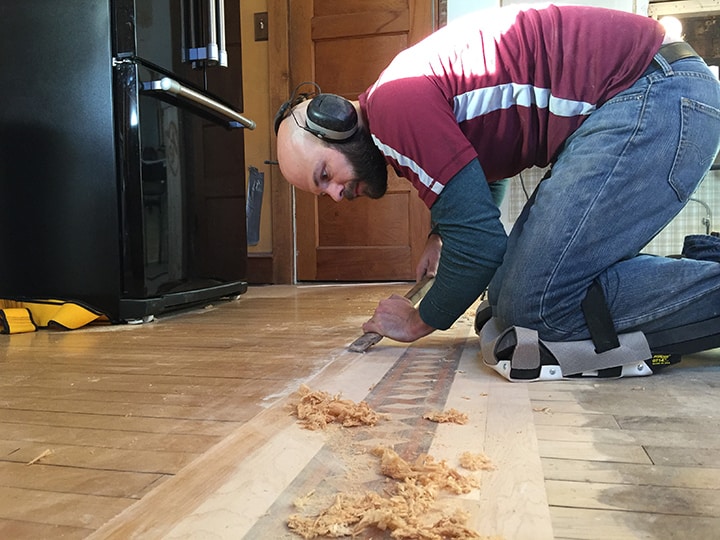 Step Seven: The Final Touch
The final step was applying the finish. One of the best ways to do this, especially with any patterns or borders, is to use the correct tool. I found the roller to be the best tool for this situation because it doesn’t drag the finish like a t-bar or pad would. The roller lays the finish down more uniformly without the pull marks you would normally get from using other applicators. 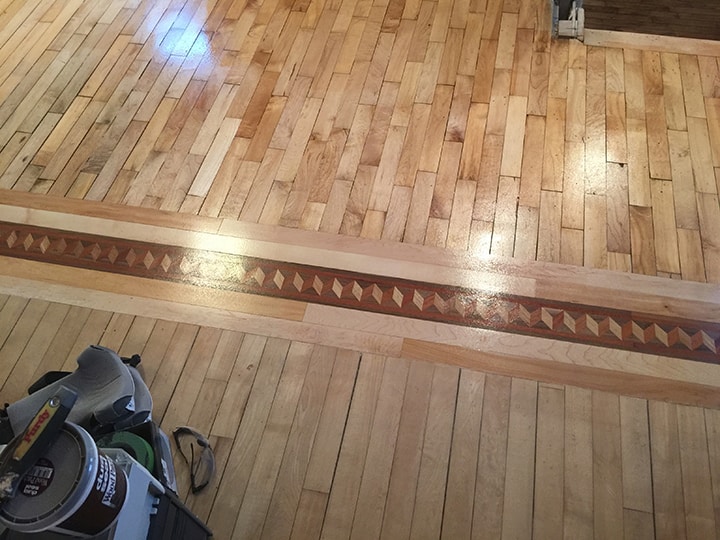 Now, the next time you see an area on which you would normally just do a simple repair, I challenge you to think outside the box and add a little flair to your repair. This will make you stand out from the crowd and give the homeowner a signature custom floor.

Aaron Schaalma is with Signature Custom Flooring LLC in Oshkosh, Wisconsin. He can be reached at aaron@signaturecustomflooring.com.