This issue of Hardwood Floors celebrates the talented and dynamic women in our industry who have gone before us and work amongst us. They smoothed the path, opened doors, and showed other women the way forward. I am so inspired by these women, and would not be where I am today without their wisdom or guidance.

Looking back on the lessons I’ve learned, and taking stock of how many influential and passionate women have inspired me never to stop growing, I hope what I do today will inspire others in the same way. While my career has gone through a series of changes, I know my journey would not have been possible without the support given to me by women in
the industry.

THE VITAL ROLE OF WOMEN IN FLOOR COVERING

I’m fortunate to have a unique perspective on the power of women in flooring history, starting from a very early age. Growing up in Dalton, Georgia, I’ve witnessed generation after generation of women entrepreneurs acting as trailblazers and role models. If you’re familiar with the history of carpet, you’ll know it all started in Dalton along
“Peacock Alley” with the crafting of hand-tufted chenille bedspreads, an industry started by brave women like Dicksie Bradley Bandy.

During the depression, Dicksie and her husband’s country store became indebted to the suppliers and were determined to repay every dollar. She boarded a train to Washington, D.C., carrying a suitcase filled with chenille bedspreads to sell to large department stores. She came home with enough money to repay her suppliers and with enough orders to give several families an income for their craft. That simple cottage industry grew and evolved to the point where Dalton is now known as the “floor covering capital of the world.”

In this industry, not only are many of my peers women, but the majority of our customers are as well. We speak of “Ms. Consumer” as making more than 91 percent of the purchasing decisions for the home.1 With the
purchasing power of women in the United States ranging from $5 trillion to $15 trillion annually, we certainly must consider “her” in our business decisions 2, and we certainly must consult women on what goes into a new product launch.

WOMEN INSPIRING OTHERS
As I look back on my career path, I am grateful to the incredible women who so generously opened doors and encouraged me to go further and to do better.

In 2001, Evelyn Myers knew that I’d moved back to my hometown, but that I was still new to the area as an interior designer. She invited me to be a guest designer in her Judd House Designer Showhouse, which would provide invaluable networking opportunities. If not for her invitation, I might not have ever had the chance to meet the many contacts who later became my bosses and colleagues at Shaw.

LESSONS IN RESILIENCE, PAYING DUES
Looking back, some of my early jobs were excruciating. One example was working for a family-owned women’s wear manufacturer whose owners would inadvertently exhale their cigarette smoke into my eyes causing me to leave work many days in tears. At the same time, they also gave me the chance to work with fabric, colorways, and people that would be selling the apparel across the U.S. That experience was priceless. Soon, I found myself training salespersons about the coming collections.

Along the way, I learned about perseverance, resilience, and the importance of hard work – even when it seemed like I was being pulled in many different directions at once. Balancing competing priorities had been modeled by my mother, a fantastic entrepreneur in her own right. As I began my own journey into motherhood, I carried with me the power of the examples and lessons that only magnified in importance over time.

While I loved the work I was doing, after the arrival of my firstborn, I was inspired to take a huge leap. The result was that my own interior design business was born. It was the culmination of all that I had learned and experienced up until then.

That business operated in West Georgia for nearly 12 years. Those years allowed me the experience of putting family first. It’s a lesson I’ve tried to live by since. I learned to be a mother first and foremost, and I had the flexibility and freedom to schedule design appointments around the schedules of babysitters, mothers’ mornings out, and my children’s evolving schedules.

ANSWERING OPPORTUNITY
The women in my life have taught me so many powerful lessons that I try to pass on to those who I have the fortune of knowing. One of the most important things I was taught is that like doors, opportunities can open and close quickly. Recognizing the opportunities requires a certain kind of “sixth sense” to know when to take them. Unfortunately, too often, opportunities can seem daunting and present themselves as “risk.”

This lesson became a huge blessing as I faced a professional crossroads in 2002. Having just become a single mother, and after operating my own interior design business for many years, I was encouraged to move into the corporate world to provide the benefits my children and I would need. While there was risk involved, it was a leap that I was well-prepared to take for my family.

So when asked if I could direct a large group of corporate professionals and juggle continually changing business priorities, I actually laughed out loud. That had become second nature to me. For years, at any given time, I had teams of painters, carpenters, flooring installers, or tradespeople going in and out of businesses and homes, on time and budget, all while being a mother of two children.

THE IMPORTANCE OF FAMILY
I hope that my experience demonstrates to other women – and men – in the industry that you can prioritize family and still have an enriching and successful career. That is perhaps the most important lesson of all, and one I hope to be remembered for, the same way I remember all of the incredible wisdom and support that was shared with me.

I encourage all of us to prioritize family and to allow everything else to fall into place. Following my own advice, I opted to exit a life of constant travel while working for a massive company, to instead revel in family. I chose to instead take a moment to savor my time being a new wife, a mother, and an empty nester.

When the time was right, I again took another risk, following my instinct, and formed a new enterprise. Who encouraged me to take that step? It was the same woman who inspired me nearly thirty years prior – my mother. g

Emily Morrow Finkell is an interior designer and CEO of EF Floors & Design LLC in Dalton, Georgia, a provider of hardwood floors and home furnishings, and an NWFA design contributor. She can be reached at emily@emilymorrowhome.com. 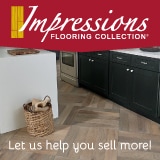