White Ash holds a special place in my wood world. As regularly readers know, I started this business in Japan, working for Maruhon, a Japanese importer/distributor who led the development of the US Hardwood market in Japan. White Ash was our key species and I visited mills in the Northeast, throughout Appalachia and all around the south. I saw the harder tight ringed northern material and the almost ‘punky’ soft material out of the Gulf states. I dealt with issues of sapwood percentages and lengths and trying to find a nice cathedral grain cut for a line of wall panels. White Ash is the species that created my career and I’ve watched with despair for years as it becomes more and more threatened by a tiny little insect.

I am used to seeing tropical woods on the IUCN (International Union for Conservation of Nature) Species Programme Red List, but White Ash was just recently added, making it officially endangered.

Five of the six common ash tree species in North America are now listed as “Critically Endangered” which is only one step from going extinct. There is a sixth species being listed as “Endangered.” Three of them – Green Ash (Fraxinus pennsylvanica), White Ash (Fraxinus americana) and Black Ash (Fraxinus nigra) are supposed to be one of the most common trees in our great hardwood forests.

What is doing this? It is the Emerald Ash Borer beetle (Agrilus planipennis). (Ironically, they call it EAB, which are my own initials and I just HATE reading over and over how EAB is destroying the Ash forests.) This exotic beetle was first discovered in southeastern Michigan near Detroit in the summer of 2002. The adult beetles nibble on ash foliage but cause little damage. The larvae (the immature stage) feed on the inner bark of ash trees, disrupting the tree’s ability to transport water and nutrients. As of August 2017, it is found in 31 states as well as the Canadian provinces of Ontario and Quebec.

The Federal Government has established an extensive quarantine zone: 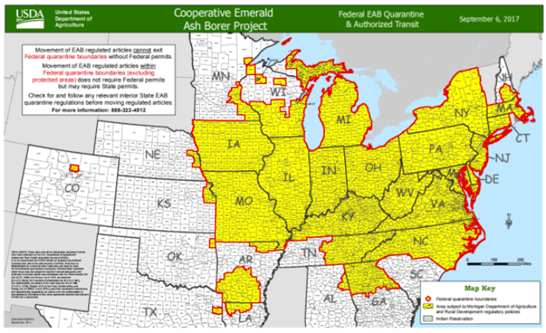 And the USDA has posted a number of webinars to help folks try to control the spread of this species. This is not just logging control. Moving firewood and other ash wood materials in areas infested with emerald ash borer is regulated by the infested states and federal government. 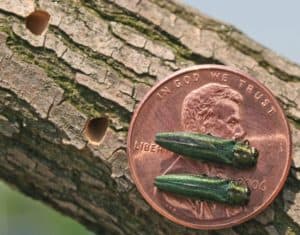 It is amazing that such a small little creature can create such devastation. But as early as 2014, Andrew Liebhold, an entomologist at the U.S. Forest Service, said “Ninety-nine percent of the ashes in North America are probably going to die though the decimation will likely vary by species. Black ash and green ash are most likely to disappear, but the Ash Borer will spare 30-40% or more of the blue ash, and 20-30% of the white ash.”

White Ash is not used heavily by the flooring industry, but it’s an incredibly important commercial wood. It is already under heavy export restrictions and of course local transport control. Logging restrictions in impacted forests can reduce access to other species. And how the loss of the Ash trees will impact the forests themselves is yet unknown. It could lead to more forest fires throughout the northeast with all the dead trees. We just don’t know, but it is a horrible thought to consider a future without Ash.

Does anyone remember the American Chestnut? My mother grew up in Chestnut Hill, PA, where these days not a Chestnut tree grows now… Wonder what is growing around White Ash, Kentucky now…and how long it will be there.